Welcome to MGH! An all girl High School filled with only the meanest girls! This is the story of a boy who was turned into a human carpet and placed in the girls washroom to be stood on, bullied, and humiliated by the entire school! 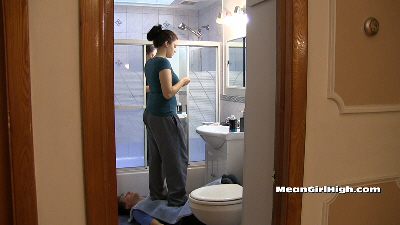 END_OF_DOCUMENT_TOKEN_TO_BE_REPLACED

This time I was invited to Gda&#324;sk for the Baltic Fetish Factory party. I wasnt alone, I shared a carpet with two friends. We attached a banner for the party to the carpet.The spot was fantastic, right near the entrance, divided by a metal railing. The men walked on one side and the women walked on our side. Women walked over us a total of 193 times! Of course some of the women walked over us several times since there werent that many girls there. The best was when they stood on us in pairs and one time even three got on top of us at once . I cant wait for the next party. Time: 47.40 min

END_OF_DOCUMENT_TOKEN_TO_BE_REPLACED

The next Polish city that I visited was Katowice. It was a BDSM party, but I chose to do my thing and was warmly welcomed as something unique in this area. Only one person had done trampling before, the rest really wanted to try it. 52 girls trampled me in this video. One girl liked it so much that she didnÂ’t want to get off for three minutes and was sticking her heels into me. There is also a scene where a girl sat on top of me, thinking that I was some king of material and she was having a drink, when other girls took her off me. The film was shot with two cameras. One was placed behind my head, the other was under the stairs. Time: 22.49 min.